Lord, I am getting bad at keeping up with this. With or without my iPhone. No big changes since my last post. Still in school, still working, still being Mommy. Although, Aiden did start the two-year-old class at preschool at the beginning of September! He was so excited about going to “big boy school.” So far, he still seems to be loving it and is learning so much! Yesterday, he just randomly counted to seven. Like it was no big deal. I was shocked!

At the beginning of September, we also took our first “family” vacation to the beach with two of my best friends. My child has no fear! He was deeper in the ocean than even I am comfortable with (which isn’t that far). I will attach some photos below from the trip.

On a totally different topic… Normally, I’m not very open with all that went down between myself and Aiden’s father and how our relationship ended. I just don’t really think it’s anyone’s business but mine, his, and our family’s. What I will say is that we are civil. You’re probably wondering where I’m going with this?

My BIGGEST pet peeve is when people assume that because I have a child, I have a husband. NO, I don’t have a husband. NO, there is no one who will be my husband in the immediate future. AND NO, (and this is the big one) I AM NOT DIVORCED OR WIDOWED. People seem to assume that because I have a kid, I obviously had a husband at some point. No, I’ve never been married and kind of glad about that fact. It’s 2012, and I am perfectly capable of raising my son WITHOUT a husband. At Aiden’s preschool Friday, I was standing there (clearly a sitting duck for these women) and two of the other moms approached me and asked “what does your husband do?”

This woman, who clearly had balls of steel, said “Oh no! What happened to him?”

WHO ASKS SOMEONE THAT?

Then, after I explained to them that Aiden’s dad and I were never married, and that I am this apparently (to them at least) almost extinct species called a “single mom,” one of them asked me, “So, are you seeing someone?”

If I am, it’s none of your damn business! GEEZ! First, I would always get “oh, your little brother looks just like you.” Now, I apparently am too incompetent to raise a child by myself.

It would really be nice to just be seen as another mom for once instead of the girl who got knocked up when she was nineteen. I mean, is that the identity that will follow me forever?

Pictures from the beach trip, as promised: 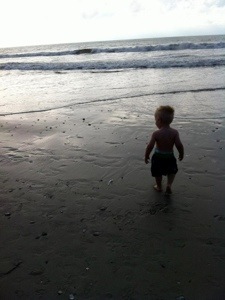 3 thoughts on “My Identity.”

Another Father’s Day where I’m reminded that this boy’s joy will never be shaken by the ones who chose not to exist in his life. Thankful for the ones who choose to love him, today and every day. 💛
Happy Graduation Day to my “baby.” 👨🏼‍🎓💚
Ice cream break. 🍦♥️ (swipe for a #mood )
Weekends with this one are never boring. 🛶🌈💕
“Only you know who you were born to be and you need to be free to be that person.” #ohheyimalittlegay #happypride
Thankful we brought this rotten furbabe into our already chaotic house.
He’ll never say no to a photo op with a rainbow wall. 🌈 #pridemonth #loveislove
I love him. 💚

Error: Twitter did not respond. Please wait a few minutes and refresh this page.